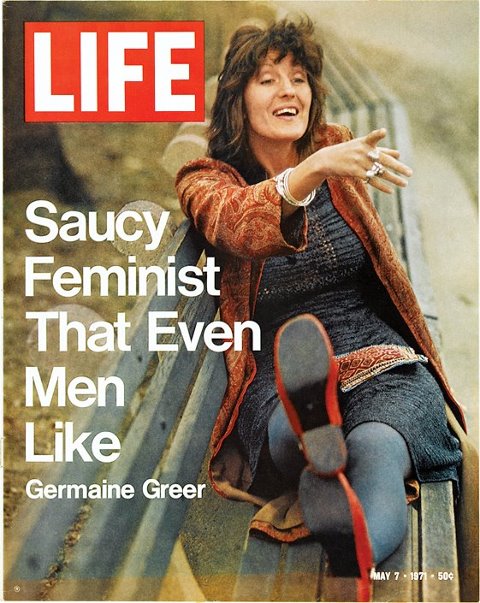 The last thing you would expect Germaine Greer, icon and iconoclast, to be is predictable. Or, even more bizarrely, predictably sexist.

What you can be sure of, in our rapidly spinning world, is that once a woman has climbed to any political height, people will be standing below with binoculars, checking out her frock and her shoes. Women of all dots and stripes, in all professions, know they will be judged on their appearance; so much so that it is frequently considered a measure of their success. This is predictable.

But you don’t expect this from a brilliant woman who has spent decades as an intellectual heretic and counter cultural mutineer. You don’t expect Germaine Greer, global feminist icon, to be now championing a debate about the size of a female leader’s bottom, or the cut of her clothes.

First, she said, unprompted on Q and A that Gillard had a “big ass” and had to “get over it” and dress accordingly. Then last weekend, she devoted an entire article to Gillard’s need to tailor, or discard her jackets. In doing so, she was simply upholding hoary clichés about women in politics. Cliches feminists have hammered with their fists for a century: that they win votes with posteriors, not policies, that their bodies should be the subject of public debate, that it is legitimate to distract from policy arguments with discussion of the pleats in a female leader’s jackets. Greer has previously expressed support for our struggling first female PM, so her words are just jarring, and weird.

“A jacket that rides up and creases between the shoulder blades is worse than no jacket at all,” she wrote. The consequence of such an ill-fitting garment, she suggested, could be loss of government: “If Labour [sic] is not to be annihilated in the next election, something has to give… I think Australians are big enough to cope with the sight of their female Prime Minister in shirt-sleeves.”

Really? Do we care that much, if at all? Do we think it has not occurred to Gillard that people notice what she wears? I hadn’t spent a second thinking about her jackets before Greer brought it up: I was more worried about the HSU and the carbon tax. Surely it is more relevant to wonder if Australians are big enough to cope with the sight of a woman in power. Not the sight of her backside.

What is perhaps most odd about this torrent from Greer is how retro and unoriginal it was: in the 1970s and ‘80s, tabloid newspapers frequently ran features on the style and clothing of women in politics, usually quoting dubious “consultants” who advised “ladies of the house” to have makeovers to woo voters, give them more authority, or soften their edge in an endless search for “the woman inside the politician”. In 1984, in an article about the supposed poor fashion sense of women politicians, a style consultant told the Melbourne Herald “poor image and dress sense hold women politicians back.” In the right wrap dress, we could rule the world! If only we knew which one.

The Australian media has a long history of telling women to embrace a new look when their political careers careen; not only is this insulting, they don’t work. We prefer the authentic to the contrived.

In 1991 former Democrat Janet Powell, who was called “Senator Sensible”, agreed to be made over by a paper – and filmed by 60 Minutes – when her leadership was under threat. Her sin? She looked “like a suburban mum.” (And looking like a mother is something we should all fear and avoid, of course, especially mothers. The horror!) She was still dumped from the leadership. Yet former Victorian Premier Joan Kirner was never more popular when she shook off a disastrous election result, squeezed into leather pants and sang Joan Jett lustily on national TV; flipping the bird to cartoonists who lampooned her weight and caricatured her as a housewife.

Gillard, too, will be more admired for being herself, the self that was once real before it was packaged and dubbed “the real Julia”. The less she listens to people badger her about a creased jacket, the more we will like her. Her greatest challenge is to try to convince us she is still real, and not distracted by a thousand clueless consultants, who seem to have lost the stethoscope that might lead them to the heart of their party.

It’s hard to be truly outraged by Greer though. Hordes of younger women who came after her now expect to disagree with her, while respecting her importance. Bombs she threw cleared space we now walk on. You only have to hark back to her once incendiary rhetoric to see how she stoked a fire in the gut of a generation. She urged liberation, not caution.