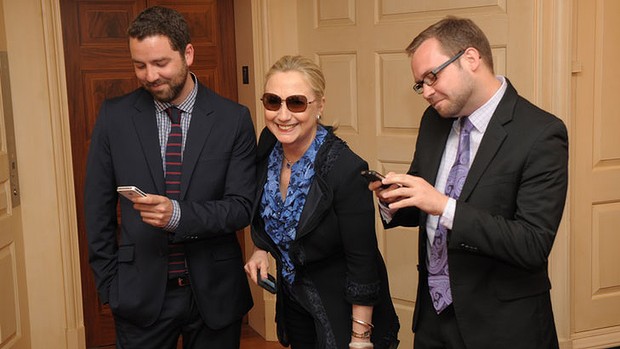 Ah, we’re a fickle lot. Hillary Clinton, the woman regularly blasted for wearing girlish headbands, luminous pantsuits and marrying a cheat is suddenly hip once more by virtue, it would seem, of three photographs. The first photograph, which became instantly iconic, shows her checking her blackberry while wearing dark sunglasses on a military plane; she looks part rock star, part dictator and part commander in chief.

The Secretary of State was quickly anointed “Secretary of Cool.” She’s always been cool, in a substantial sense: smart, serious, intense and driven. And now she is, happily, cool because of what she has achieved, not how she looks. (Suck on that, hipster blogs.)

A second photo, taken at a bar after a long day of meetings in Colombia, shows her looking relaxed, drinking beer. A third captures her dancing, one arm reaching above her head, beaming. Dressed, again, all in black.

We love her for this, especially when slammed for daring to have fun. A Fox commentator, Nile Gardiner of the Heritage Foundation said she was being embarrassing and asked if she was auditioning for Jersey Shore. Look out Snooki! But the real reason we love her is because she represents something you cannot photograph: tenacity, endurance, and a fierce ambition.  She has somehow married youthful ideals with an often-bitter pragmatism. She has steamrollered hate, sexism and vile attacks – and a national obsession with her husband’s cigar tricks with interns – and kept on rolling. Very few could follow in the footsteps of a brilliant spouse with such confidence.  She never accepted that her role was simply that of wife.

Hillary Clinton has been America’s most admired woman for years.  She came extremely close to becoming President of the United States in 2008, partly because of the strong support she got from women, Hispanics and blue-collar voters. She won almost 20 million votes and a swag of states, including New Hampshire, California, New York, Nevada, Texas, Ohio, Rhode Island, Pennsylvania, Indiana, West Virginia, Kentucky, Puerto Rico, and South Dakota.  She told supporters:  “Although we weren’t able to shatter that highest, hardest glass ceiling this time, it’s got about 18 million cracks in it.”

Today, her approval ratings are consistently higher than Obama’s, and hover just under 70 per cent. In many ways, she is most loved when she appears more vulnerable; when her husband was unfaithful – after which she launched her own political career – and when she lost an often brutal presidential campaign only to loyally serve under her arch-rival.  We admire her talent and ambition but, warm to her when she falters. Most of all we respect her perseverance. Since the elelection, she has worked almost seamlessly with Obama; the only obvious hiccup in communication was over the Egyptian uprisings.

The humor in the spectacularly successful “Hillary Texting” meme (check it out if you missed it), which sprang from the sunglasses photo, comes from her kick-ass confidence, awareness of her own power, intolerance of idiots, and her stamina. In one, Obama is lying down on a couch, looking relaxed. He texts: “Hey Hil, Whatchu doing?” The response: “Running the world.”

In another, Obama and vice president Joe Biden, are looking at an iphone and giggling: “She’s going to love the new Justin Bieber video!” Hillary texts: “Back to work boys.”

Hillary has worked on a 24-hour cycle for decades. As secretary of state, as of March 24, Clinton has rolled along the runways of 95 countries, over 730,000 miles, and participated in almost 600 White House meetings.

This is not, of course the first time she has been imbued with hip-dom. In 2008, Tina Fey made Hillary cool when she memorably declared bitch was “the new black.” At that point in the campaign, Hillary was being slammed as someone who was tough and unscrupulous, unlike Obama, who promised sweet hope.

“I think the thing that bothers me the most,” said Fey, “is that people say Hillary is a bitch. And let me say something about that. Yeah. She is. So am I – and you know what? Bitches get stuff done. And that’s why Catholic schools use nuns as teachers and not priests. Those nuns are mean old clams and they sleep on cots and they’re allowed to hit you. And at the end of the school year you hated those bitches but you knew the capital of Vermont. So I am saying it’s not too late to get on board, bitch is the new black!”

This is why Hillary is cool right now. She may not be cool next week, but she won’t care. She’ll be flying on planes, negotiating with Libya and Pakistan.  Bitches get stuff done.