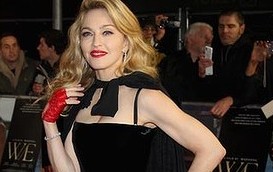 Remember Madonna’s stomach, back in the 1980s? It was flat, but soft, and flashed often under her midriff shirts in videos for Lucky Star and Holiday. Back then, her stomach showed who she was: sexy, provocative and deliriously assertive. She had curves, she danced, she rolled on the floor, and she seemed to have sex whenever, wherever and probably with whomever she wanted to. She inspired a generation of us to dare a little more, bare a little more and to not care.

Now when I think of her, I think of her arms. Her taut, muscled biceps, alarmingly free of padding, are perfect symbols of her determination. Arms like that don’t come easily – not at 30, but especially not at 50. She works very, very hard – and this is why she has endured.

But, now, this hard work is deflating as well as inspiring. She might not have cared about what people thought of her sexually, but she obviously cares what people think of her physically. Sure, it’s wonderful to be able to perform cartwheels in high-heeled boots as she did at the Super Bowl. Props to that. But is physical stamina what we need to liberate us as we grow older, or is it freedom from having to look like a sculpted, acne-free, 20-year-old? We now know that women like sex – but do they still like themselves as they age? Madonna has become a model of exhaustion (gym marathons) and cosmetic longevity as well as sexual freedom (young boys are her weakness). But she no longer represents an idea – liberation, say – as much as extreme effort.

Madonna taught us to face fears: of the consequences of blooming sexuality, independence, anger, eccentricity and unconventionality. Of being women who don’t do as they are told. But not so much the fear of ageing. I can’t help but wish, as brilliant British author Caitlin Moran said to me in an interview recently, that Madonna would just let herself become a smart, defiant, old woman: “If Madonna could just hag up now and just look like a wizard and just grow long, grey hair down to her knees and start using a stick and shouting at people in a really angry way, that would be amazing.”

It would, wouldn’t it? Ageing is an art form few know how to master. We value youth, but we used to also admire wisdom. And we know wisdom accumulates with age, if we pursue the right things, if we train ourselves to remember what is important, to learn how to love, speak and be better. Madonna may be telling us that middle-aged women should not become invisible, inaudible or afraid to be alone, which is, of course, good – but she makes it seem like you have to look a certain way to do so.

When she was young, she was a bold Italian with hairy armpits who refused to behave the way girls at her school did to get boys. She says she finally found herself in explosive gay nightclubs in New York City; her refusal to behave the way women are told they should has continued throughout her life. She recently told Naomi Wolf in Harper’s Bazaar that what was most important was, “to continue to be a provocateur, to do what we perceive as the realm of young people to provoke, to be rebellious, to start a revolution”.

Yes! But can only the pretty start revolutions? When Madonna refuses to age, when she turns her body into a scientific experiment, she stops representing rebellion and starts representing obedience. An obedience that requires wealth, time and an enormous, unending amount of effort. It might be too much to ask of a star, to ask them to, say, be themselves at every age. To look their age, which has always seemed a strange insult to me. Her career depends on her beauty.

But I can’t help but think that inside Madonna somewhere is a hirsute Italian-American with brown hair, thick eyebrows and a bad attitude, struggling to recognise her stuffed cheeks and wide eyes in the mirror. Madonna did teach us to be our true selves. Until we get old.